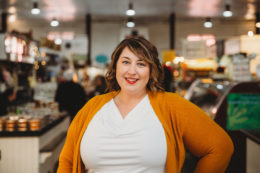 Amanda Bakay joined the Lancaster Science Factory as the Director of Operations in January 2018. She previously worked in retail banking and later banking operations at BB&T. She has a bachelor’s degree in History and Sociology/Anthropology from Mansfield University of Pennsylvania. She was born and raised in Lancaster County. Today, through the expansion of the Science Factory staff, she is the Director of Programs and Communications.

Amanda believes in the mission of the Lancaster Science Factory and wants to ensure that children from all parts of our community can visit and be inspired through hands-on exploration and play.  Her STEM hero is Lonnie Johnson who used his engineering skills to build the ultimate toy- the Super Soaker!

Amanda and her husband, Dennis, live in SoWe with their hound dog, Maumee.