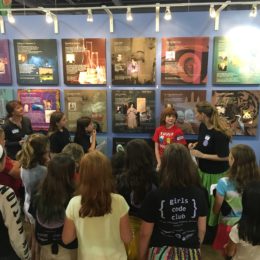 ed a new plaque in the Hall of Heroes honoring Ada Lovelace on Oct. 6. The dedication corresponded with Ada Lovelace Day, Oct. 10. The plaque was unveiled after the first Code Club session at 5:25 p.m. and after the second Code Club session at 7:25 p.m. A total of 50 girls participated in the plaque dedication. The plaque was designed to inspire girls and generate an interest in computer sciences.

Lovelace was an 19th-century English mathematician and writer credited with being the first computer programmer. At age 17, she befriended mathematician Charles Babbage, who demonstrated for her a model portion of his difference engine, an enormous mathematical calculating machine. Lovelace perceived that the machine had applications beyond pure calculation, and she created the first published algorithm ever specifically tailored for implementation on a computer.

For more information about the Lancaster Science Factory, readers may call 717-509-6363 or visit https://www.lancastersciencefactory.org.