Pioneering Computer Scientist, Grace Hopper, inducted into the Hall of Heroes at the Lancaster Science Factory.

LANCASTER, PA – A new plaque in the Hall of Heroes honoring Grace Hopper was  dedicated on Friday, May 4th by the members of the Lancaster Science Factory’s Girls Code Club.

Grace Hopper was a computer scientist and US Navy rear admiral who was at the forefront of computer programming and development from the 1940’s through the 1980’s. To honor Hopper, a special plaque was unveiled by the members of the Girls Code Club. About 25 girls ages 8-13 will participated in the dedication.

In the past 20 years, girls’ participation in computer science has dropped by more than 40%. The plaque to honor Grace Hopper, as well as the Girls Code Club itself, is designed to inspire girls and generate interest in computer sciences.

Grace Hopper (1906-1992) was always a curious child. At the age of seven she dismantled seven alarm clocks to determine how they worked. She earned her PhD in mathematics from Yale.

Known as “Amazing Grace,” Hopper was on the team that developed the first large-scale electronic computer on the market in 1950. She later proposed writing computer programs in words, rather than symbols, making coding languages more practical and accessible. Hopper was posthumously awarded the Presidential Medal of Freedom in 2016. 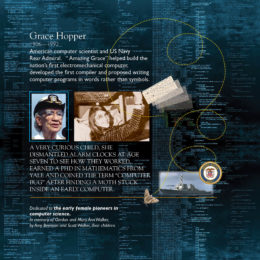